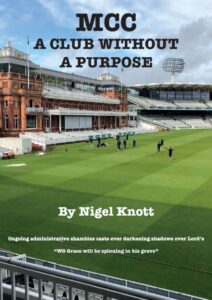 Out now …. a new publication by Nigel Knott

“It is a well-known fact that successful organisations cannot be run by committees, let alone by a Secretary, a Deputy Secretary, four Assistant Secretaries and more than 150 unelected Members of various sub-committees advising a main Committee responsible for the entire management of everything. A Royal Charter Company, with an annual turnover in excess of £50 million and known as the MCC, embraces this extraordinary method of government. The consequence has been years of mismanagement, waste and lack of accountability that has had lasting negative results both for the Club itself and for the 18,000 full Members.” 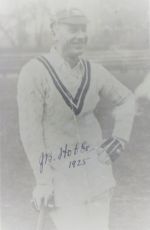 It is difficult to remember a period of so much controversy and upheaval on the cricket fields of England. The unregulated commercialisation of our national sport at the hands of the English Cricket Board (ECB) is in danger of destroying more than two centuries of traditional customs and practice. A stark clash in cultures is creating a serious schism that has to be resolved before lasting damage is done. The determination of the ECB to carry on regardless is causing very great public concern. Personal agendas are bringing the national game into disrepute and the fact that the ECB is a private company accountable to nobody is totally unacceptable. The ECB is unregulated, unchecked and out of control. What is happening today amounts to a commercial Heist of traditional cricketing values and the conversion of cricket into a commercial commodity marketed purely for cash. The memories of great amateurs filled with the buccaneering spirit of those inspired by national pride to perform epic feats with bat and ball are being debauched by a culture of Mammon.

It is time for the MCC Members to stand up and be counted alongside a very large number of English fans who consider that the traditional game of Test Match Cricket is in danger of serious decline. The amateur interest nurtured for several centuries within the grass roots game is in danger of being suffocated as profit and loss snuffs out the spirit of a great national game. A civilizing sport becomes just another commercial activity. The game is being hijacked by the marketeers and those who would be better employed as turf accountants.

The time has arrived for an investigation into the activities of the ECB and the future of what Jim Swanton aptly described as “Pyjama Cricket” in order to prevent the traditional game from being desecrated. There is a serious issue of whether the hybrid commercial activities of today are worthy of classifying as a part of our national game at all and for those whose lives include cricket almost as part of their religion, the modern secular way of life is unacceptable.

To make matters worse the poison of politics and the role of a newspaper magnate in the last General Election has made the chances of ever seeing a Lords Test Match seen again on terrestrial TV very remote.

It is time to remember the action of G O “Gubby” Allen when he resigned from the Cricket Council on the day it ceased to be the sole arbiter and judge of cricketing disputes. Today the game is in the hands of people who have not even played the game or been properly elected to the office of cricket governance. The MCC must leave the ECB and act as the independent trustee of the best interests and finest traditions of our national game. Our heritage at Lords was bequeathed in trust by our forefathers and Test Match Cricket at Lords played between representative national teams according to the Laws of the game was their ultimate wish. MCC Members, all of whom are today’s cricket trustees, should behave as such and return the Club and Lords to a path of independence where England teams will always be made welcome to play Test Match Cricket and their live performances made available to the widest possible audiences.